I can’t think of a more American way to spend summertime with family, than to watch a good old baseball game.  On the 4th of July I took my family to see the Philadelphia Phillies host the Baltimore Orioles, and what a game it was.  We arrived about an hour and a half before first pitch to enjoy the stadium and all its goodies.  Citizen’s Bank Park here in Philly is more than just a ballpark.  It’s built to bring the whole family together.  Young and old

and everyone in between have plenty of options.

There’s something for everyone in the gift shop and vendors scattered around the main level.  Ashburn alley has mini games for the kids to play including a hotdog launcher, wall climb, pitching cage, and a mini home run derby.  On the day we went it was extremely hot outside, but a quick walk through the water misting area and the family fun were enough to make it comfortable. 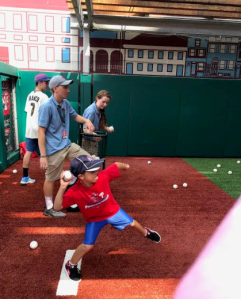 Then we were off to grab some food and drink.  When we arrived at the new “Boardwalk Eats” area, we were surprised that there were so many more options than just hotdogs, peanuts, and cracker jacks.  Now wait.  I know you’re probably thinking that those are crucial baseball necessities during a game, but why not have more options?  There were large smoked turkey legs, brisket tacos, vegan and regular cheesesteaks, edible cookie dough, pulled pork sandwiches and more.  The foodie in me was having a hard time deciding, but ultimately I went with “the big dog”, which was a kielbasa sandwich.

After our bellies were full, we grabbed some lemonade for the kids, and a beer for my husband and I.  Then we were off to watch the game.  The Phillies won, but Baltimore put up a great fight for one of the most entertaining games I’ve seen in a while. 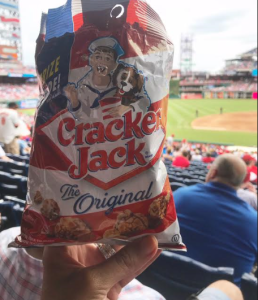 We grabbed some snacks throughout the game, a few refills, and made some great conversation with people who we met around us in our seats.  Oh, and speaking of seats… we were behind the Orioles dugout on the third base line.  The view was spectacular, but Citizen’s Bank Park does not have a single bad seat.  Even the ones all the way at the top provide a great view of the field. 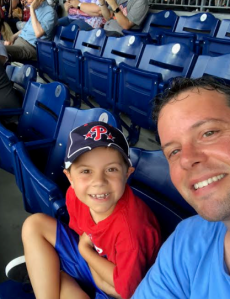 All four of us in the Pipito household are eager to return again soon for another fun day of baseball, family, and eats.