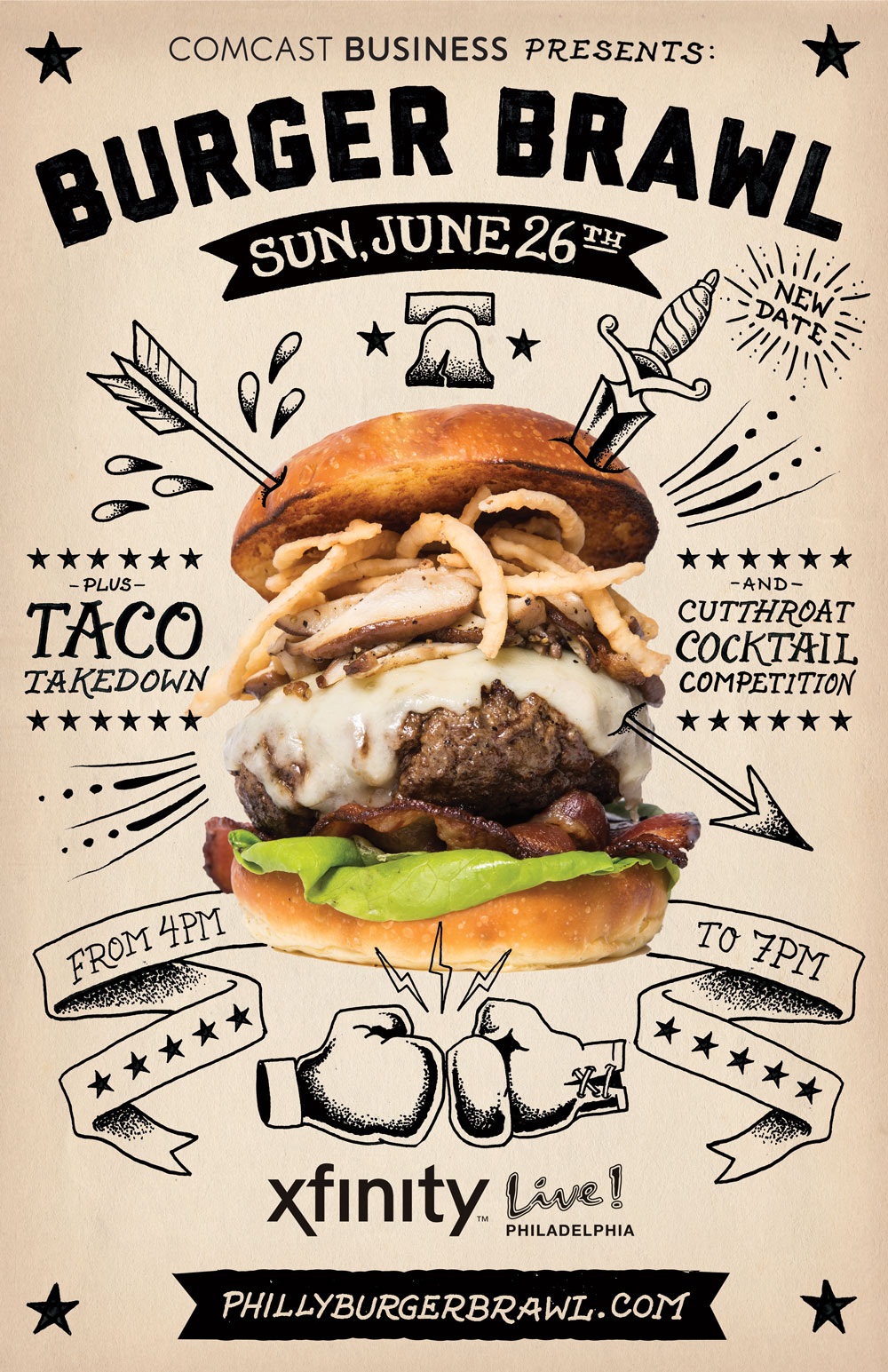 The Sixth Annual Philadelphia Burger Brawl presented by Comcast Business will be held on Sunday, June 26, from 4:00-7:00 p.m., VIP access starts at 3:00 p.m. XFINITY Live hosts the event at 1100 Pattison Avenue, Philadelphia, PA 19148. The event will be held rain or shine.

Winners will be determined by a panel of judges including Mike Jerrick from Fox 29, Matt Cord and Steve Morrison from WMMR, former Philadelphia Phillies player Garry Maddox. Im also so excited to be part of the judging panel. Prizes will also be awarded for the People’s Choice winner in each category and every attendee’s vote counts.

Burger Brawl contenders scheduled to participate to date include:

Taco Takedown contenders to date include:

The event began as a neighborhood fundraiser for founders Rob and Maggie Wasserman’s children’s school, The William M. Meredith Elementary School, in South Philadelphia. Five years ago, their goal was to gather a few restaurant industry friends to create a small event at Fleisher Art Memorial that would eventually fund a new computer lab for Meredith. Burger Brawl soon outgrew Fleisher and in 2014 moved to the XFINITY Live! Complex. More than 3,000 people attended and more than 50 restaurants participated. After funding one computer lab and two technology initiatives, Burger Brawl has set even higher goals.

The Philadelphia Burger Brawl is one of the partners with The Fund for the School District of Philadelphia, the Olitsky Family Foundation, AIM Academy (Academy in Manayunk), and The Philadelphia School District to run a four year pilot program for two Philadelphia public schools that were selected based upon district- wide RFP process in 2014; Andrew Jackson Elementary School located at 1213 South 12th Street, in South Philadelphia and the William H. Ziegler School, located at 5935 Saul Street in Northeast Philadelphia. This four year pilot program will utilize technology to increase literacy for elementary school age children. If the program proves successful, it could be rolled out district-wide. A portion of the proceeds from this day will go to Compete 360, an organization founded by Garry Maddox to support the education and development of urban youth.

Tickets are available at www.phillyburgerbrawl.com and sold exclusively through Ticketfly.com.

General admission tickets are $50 and include one vote for the best burger and a complimentary beverage.

VIP tickets are $125 and provide early access for one hour to explore and sample the 60 contenders at this year’s event, as well as access to a VIP lounge, opportunities to meet celebrity judges and one vote for your choice of best burger.

Children ten years old and younger will be admitted free.  Guests who are ages 11-21 can purchase tickets for $35. Tickets will not be sold at the door.

Parking for the Burger Brawl at XFINITY Live! is free.